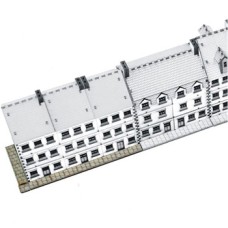 15S-TAO-105 this is a 15Standard 4Ground model with high detail and pre-painted parts.

This set provides you with straight and corner flagstone pavement sections 12mm in width, allowing you to make a real urban environment for your men to fight over. They fit perfectly against the buildings with the doors opening directly onto the pavement.

As Towns grew their main roads got more busy and pedestrians needed their own paths off from the roadway. Then as towns grew even larger (towns like Carentan and the city of Cherbourg), more and more of their road infrastructure was cobbled and the paths for pedestrians became raised flagstone pavements.

These flagstone street pavements usually radiated from the more central areas of cities and towns where there were more affluent businesses, shops and households. During urban combat, with almost constant scenes of intense fighting to dislodge well hidden defenders, these changes in the roads and pavements would tell attackers that they were heading ever closer to the centre, success would be measured in paved streets rather than road miles.